Start a Wiki
Joe is a Killer Klown with rainbow-colored hair and one of members of the Killer Klown Parade. He looks awfully like Jumbo. He shot one person who knew that the Klowns were killing people and was hiding under a car. Joe walked by him without spotting the man, who only five seconds after Joe walked by had abandoned his hiding place to make a run for it. Joe quickly turned around and shot the man from behind, turning him into a cotton candy cocoon. Joe saw Mike, Dave and the Terenzi Brothers in the ice cream truck driving off, but wasn't able to get off a shot at them. The poor fellow hiding under the car would have had a definitely better chance of surviving should he have chosen to wait longer for the clowns to pass by.

Later, Joe was coming out to whack down the three humans Mike, Debbie and Dave, who had just barely escaped Spikey and two other Klowns chasing them with a balloon pooch. (You can see him coming out from behind a pillar attached to a spherical object in the camera shot during the three seconds where Shorty and two other Klowns also came out). He was carrying a yellow and brown polka dotted stick that had a slightly obtuse angle (rather, had he and the other Klowns carried their cotton candy guns instead, the three heroes would have instantly been killed). He was seen back behind the row of Klowns when Mike, Debbie and Dave are surrounded after climbing onto the top of a staircase. He, along with the other Klowns, was petrified when the Terenzi Brothers crashed their truck into the wall. Using a plastic clown head on top of the ice cream truck, the brothers used their speaker system to order the Klowns not to harm the three humans. Joe and all the others left when they realized their actual leader, Klownzilla, was coming to kill the humans.

He was going to have a bigger role in the movie, in which he grabbed Debbie from a trapdoor, forcing Mike and Dave to free her and Dave struggled with Joe a bit before escaping. 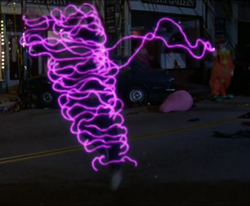 Joe shooting a human from behind

Joe on the right
Add a photo to this gallery
Retrieved from "https://killerklowns.fandom.com/wiki/Joe?oldid=6734"
Community content is available under CC-BY-SA unless otherwise noted.